A diversity of fish species live in the Mid-Atlantic region, including migratory species (such as striped bass), forage fish (such as menhaden), and diadromous species (such as herring, eels, and salmon). Latitude and depth, which are usually linked to water temperature, are the primary factors that scientists use to define fish species distribution in the Mid-Atlantic ocean (Stevenson et al. 2004). Several fish species are moving northward and into deeper (and, therefore, cooler) waters as a result of climate change (NEFSC 2015).

Three coastal/marine fish species are endangered on the Northeast Atlantic coast: Atlantic salmon, Atlantic sturgeon and shortnose sturgeon (NOAA GARFO). These species are anadromous, meaning they hatch in rivers and then migrate to the ocean, returning to rivers to spawn. This life history strategy has made them particularly susceptible to historical human disturbance in watersheds, estuaries and coastal areas. Atlantic and shortnose sturgeon also spawn in rivers but juveniles and adults mainly inhabit estuaries and shallow nearshore areas (NMFS-sturgeon).

Commercial fishing between 1950 and 1990 led to overharvest and widespread declines of Atlantic sturgeon, which were once present in 38 rivers from St. Croix, Maine to St John’s River, Florida (NMFS-sturgeon). They are now confirmed present in 32 rivers; the Hudson River is one of two rivers for which population estimates are available: 4,600 wild juveniles in 1995 (NMFS-sturgeon). There are no historical population estimates for shortnose sturgeon, and although it was rarely the target of commercial fishing, it was often taken incidentally in the commercial fishery for Atlantic sturgeon (Dadswell et al. 1984).

The following sections of the ROA are closely related to the Fish section:

Several whale, dolphin, and seal species use ocean habitats in the Mid-Atlantic. Marine mammal species listed as federally endangered include the blue, humpback, fin, sei, sperm, and North Atlantic right whales (NOAA-GAR). In addition, the West Indian manatee is listed as endangered by the state of Virginia.

The Mid-Atlantic ocean is part of the migratory corridor along the Atlantic coast used by many whale species. Relatively little is known about migratory routes for many rare whale species in the mid-Atlantic, but a recent study by the Biodiversity Research Institute (Williams et al. 2015) and research by the Marine Life Data Analysis Team are beginning to fill this gap. 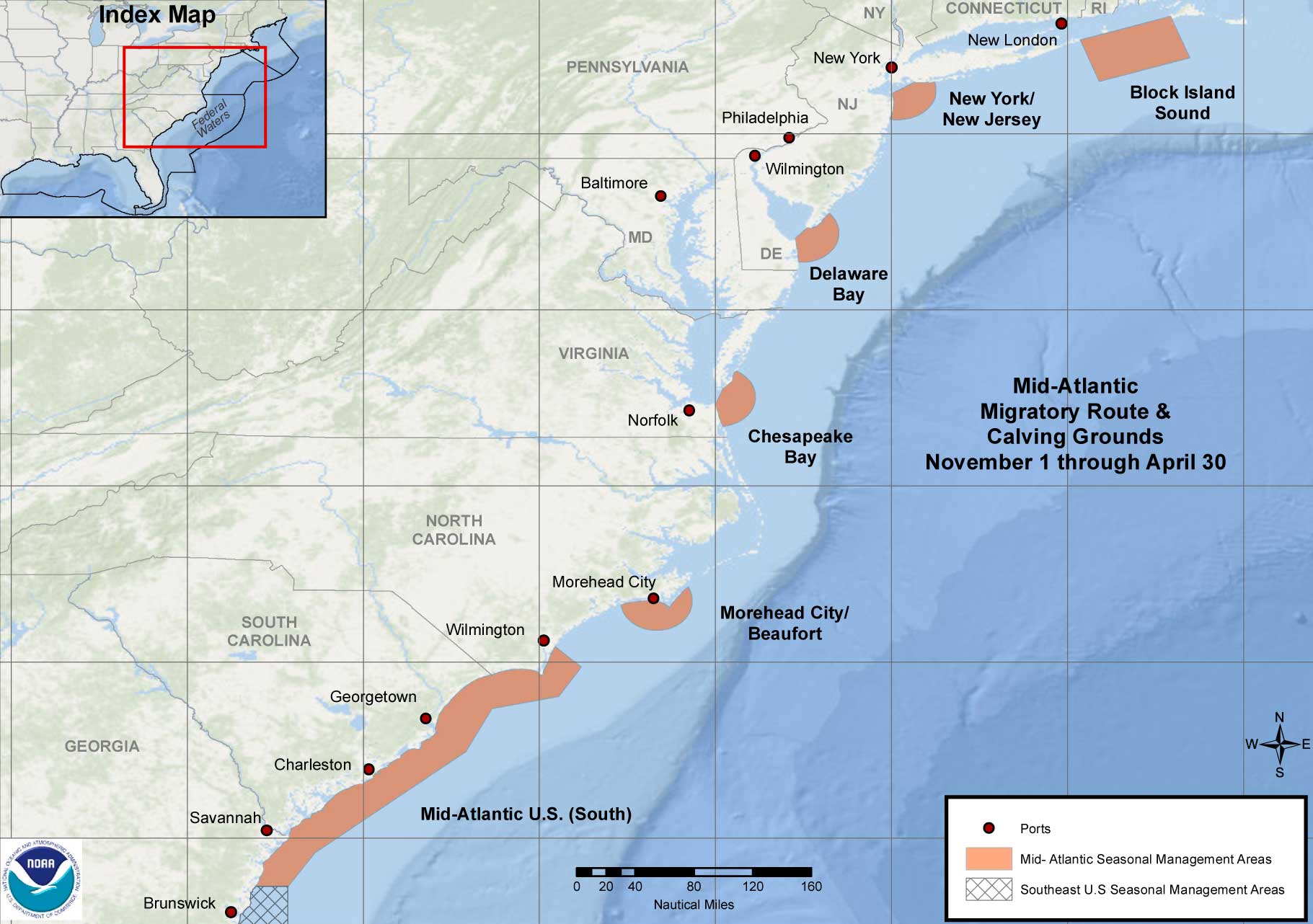 The following sections of the ROA are closely related to the Marine Mammals section:

The sea turtle species most likely to be found in the Mid-Atlantic include the federally endangered leatherback and Kemp’s Ridley sea turtles, the threatened loggerhead and green sea turtles and, to a lesser extent, the endangered hawksbill sea turtles. Sea turtles often migrate long distances from nesting beaches (in temperate and tropical waters) to their foraging grounds, following oceanographic features such as fronts associated with the Gulf Stream—places of dynamic and productive ocean conditions where many other species often gather to feed (NEFSC 2015). As water temperatures warm in the spring, sea turtles have been documented migrating northward, arriving in Virginia waters as early as April/May and on the more northern foraging grounds in New England in June. This trend reverses in the fall as water temperatures cool. Data on sea turtle occurrences are very limited for the Mid-Atlantic region, and further surveys are necessary to better understand important areas for sea turtles. 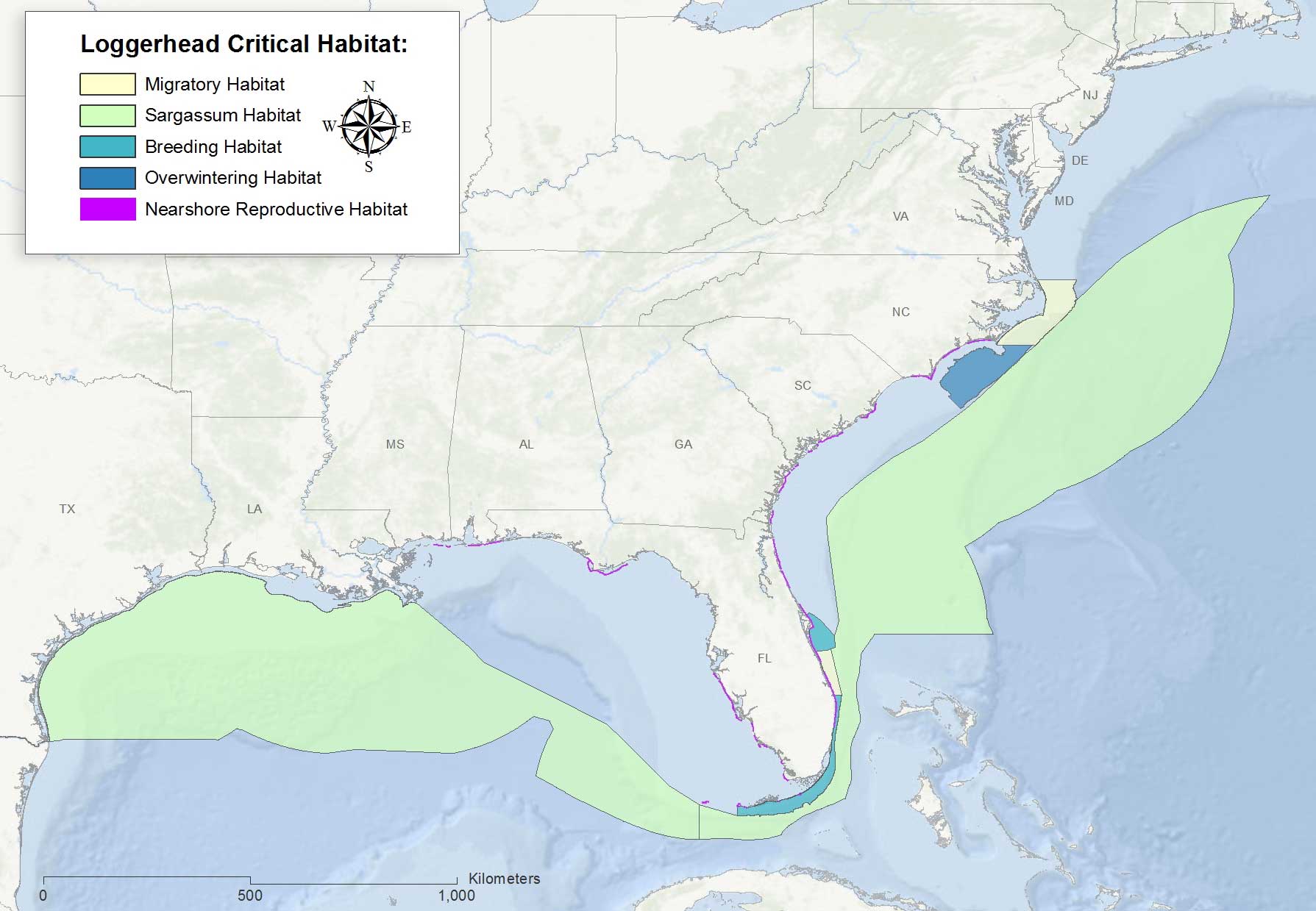 The following sections of the ROA are closely related to the Sea Turtles section:

Seabirds and shorebirds are important members of Mid-Atlantic coastal and ocean ecosystems. Several species of beach nesting shorebirds, including plovers and tern species, are endangered or threatened in Mid-Atlantic states.

The seabird community in the Mid-Atlantic is dynamic and changes with the seasons. Seabirds that make annual migrations between breeding areas in the north and feeding areas in the south pass through the Mid-Atlantic region in spring and fall (Williams et al. 2015). In the summer, there is also a large population of coastal birds and migratory seabirds such as shearwaters and storm-petrels (Williams et al. 2015).

Mid-Atlantic beaches serve as important nesting habitats for piping plovers, a federally threatened bird species on the Atlantic coast (FWS-PP). Piping plovers are migratory birds that nest on coastal beaches during the summer and migrate south during winter (FWS-PP). Another coastal species, the red knot, is an endangered bird species with one of the longest migrations in the animal kingdom—more than 9,300 miles twice per year (FWS-RK). Surveys of wintering knots along the coasts of southern Chile and Argentina and during spring migration in Delaware Bay on the U.S. coast indicate that a serious population decline occurred in the 2000s due to reduced food availability from increased harvests of horseshoe crabs (FWS-RK). 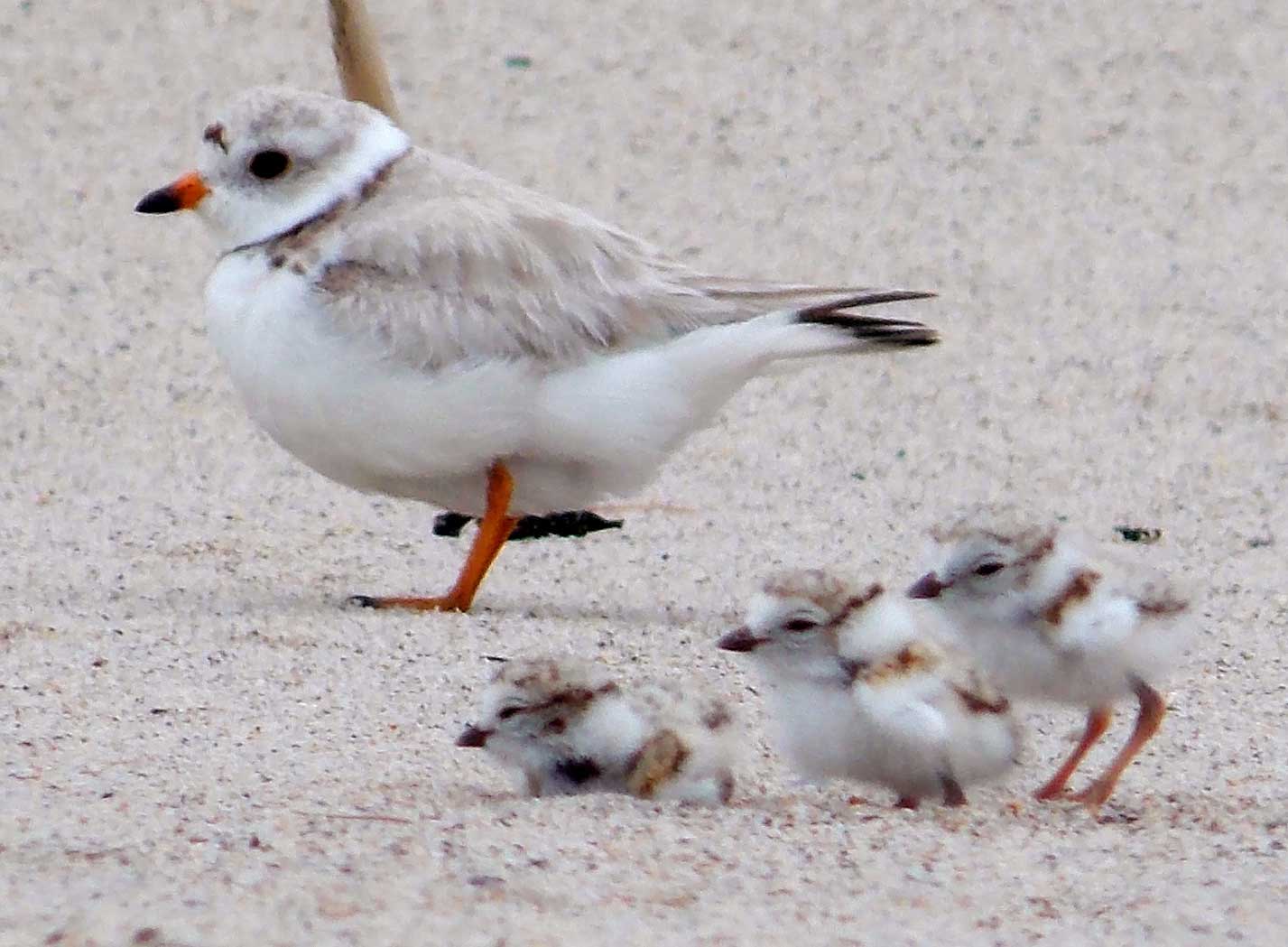 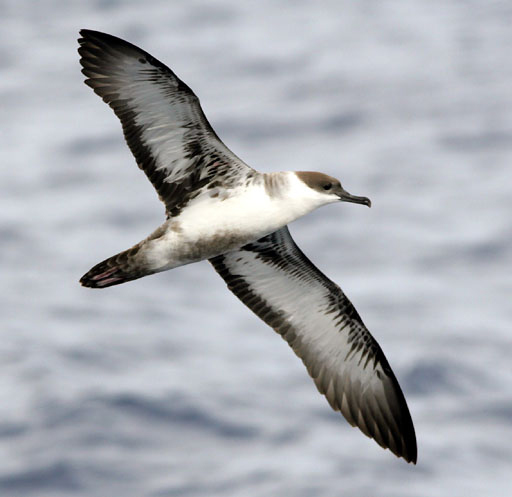 The great shearwater is one of many seabird species of the Mid-Atlantic. (Credit: Patrick Coin)

The following sections of the ROA are closely related to the Birds section:

A Bird, a Crab and a Shared Fight to Survive (New York Times)

There are several important nearshore and offshore species of shellfish in the Mid-Atlantic region, notably sea scallops, surf clams, ocean quahogs, and oysters.

Atlantic sea scallops occur on sand and gravel sediments in the deeper waters of the Mid-Atlantic and represent one of the most valuable commercial fisheries in the U.S. (NOAA). NOAA and the New England Fishery Management Council cooperate to manage this fishery (NEFMC). Sea scallops are currently not overfished. Underwater camera surveys are used to characterize juvenile and adult sea scallop abundance. In 2015, NOAA surveys in the Mid-Atlantic found high numbers of juvenile scallops, indicating that the adult scallop population was healthy, and that commercial yields could be expected to be high in the near future (NOAA).

Together, surf clams and ocean quahogs are the dominant infaunal clams on the Northeast Shelf (VIMS). Surf clams are among the largest clams in the world and are found in coastal subtidal areas to depths of some 80 feet deep, whereas ocean quahogs live in waters deeper than 80 feet (VIMS). The Mid-Atlantic Fishery Management Council manages both the surf clam and ocean quahog under a single fishery management plan. Surf clams commonly live to be 15-20 years old, and ocean quahogs commonly live to be more than 100 years old (MAFMC). As one of the longest-living and slowest growing marine bivalves in the world, some ocean quahogs have been found to be over 200 years old (MAFMC). Although adult surf clams are sessile (do not move), the species range has shifted since the 1980s northward and to deeper waters (Weinberg et al. 2005). This shift in the surf clam population has been attributed to thermal stress from warmer waters in the southern part of their range (Weinberg et al. 2005, Link et al. 2015).

Oysters are an estuarine species with their early life history phase in the water column and their adult phase on the bottom. Oysters are known as “ecosystem engineers” because they add structural complexity to existing habitats, which in turn attracts and supports other marine life. Oyster reefs also serve as living breakwaters that stabilize sediments, dampen waves, and reduce shoreline erosion. Because oysters are filter feeders, they also increase water clarity, which is beneficial for seagrass growth and nutrient cycling (Grabowski et al. 2012). Oysters are less extensive in distribution and abundance in estuaries of the Mid-Atlantic than they were in the 1800s. However, transplanting of oysters has enhanced their numbers in many areas (Rothschild et al. 1994). 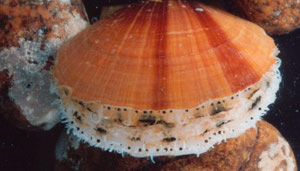 The following sections of the ROA are closely related to the Shellfish section:

Loss of oyster reefs a global problem, but one with solutions (Virginia Institute of Marine Science)

The scallop scoop: Survey forecasts a banner year in the Atlantic (NPR)

Essential Fish Habitat (EFH) includes all types of aquatic habitat—such as wetlands, seagrasses, and rivers—where fish spawn, breed, feed, or grow to maturity (NOAA). While many of these habitats occur along the coast, some offshore areas have also been designated as EFH. EFH is described, identified, and mapped in Fishery Management Plans by the Mid-Atlantic Fishery Management Council and Atlantic States Marine Fisheries Commission for twelve species in the Mid-Atlantic region (NOAA):

NOAA and regional fishery management councils also identify “habitat areas of particular concern” or HAPCs. These are considered high priority areas for conservation, management, or research because they are rare, sensitive, stressed by development, or important to ecosystem function. In the Mid-Atlantic region, NOAA and the Mid-Atlantic Fishery Management Council have designated HAPCs for summer flounder and golden tilefish. For summer flounder, the HAPC is a habitat type, rather than a discrete area and includes “all native species of macroalgae, seagrasses, and freshwater and tidal macrophytes in any size bed, as well as loose aggregations, within adult and juvenile summer flounder EFH” (Amendment 12 to the Summer Flounder Fishery Management Plan). HAPC for golden tilefish includes tilefish EFH within four canyon areas: Norfolk, Veatch, Lydonia, and Oceanographer canyons (Amendment 1 to the Tilefish Fishery Management Plan). 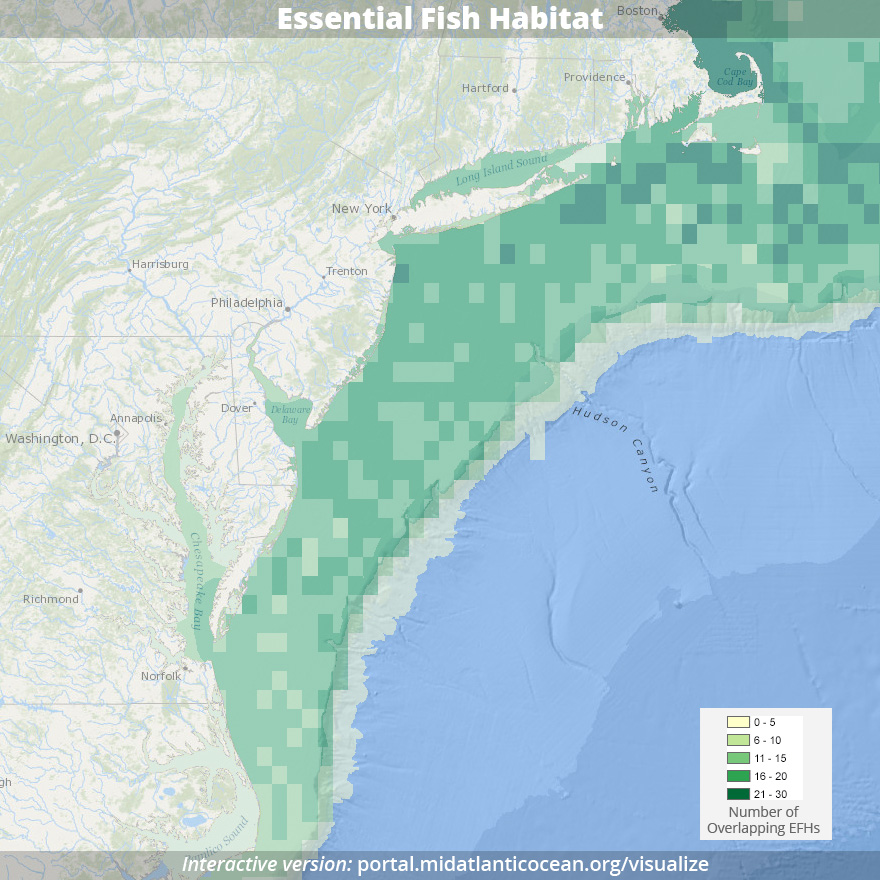 The following sections of the ROA are closely related to the Essential Fish Habitat section:

What Is Essential Fish Habitat? (NOAA)

Deep-sea corals grow very slowly and live for hundreds and sometimes thousands of years (Roberts et al. 2006). Unlike shallow-water and tropical corals, they do not contain many symbiotic photosynthesizing cells, and instead rely on food particles that rain down from shallower depths. Deep-sea corals provide refuge for many other species, thereby increasing the productivity of the environment (NOAA). Because these corals live at great depths and are difficult to study, much remains to be learned regarding their biology, interactions with other species, and intersections with natural events and human activities.

Based on observed locations of deep-sea corals and a number of environmental variables, NOAA developed habitat suitability models to predict where deep-sea corals may occur. Addition of recent data from NOAA exploratory cruises could further improve the model.

To protect the corals and their habitats, the Mid-Atlantic Fishery Management Council (MAFMC) in 2015 agreed, after consultation with the fishing community, to prohibit the use of all bottom-tending gear—such as trawls, dredges, bottom longlines, and traps—in areas that are known or highly likely to contain cold-water corals. The MAFMC Deep Sea Corals Amendment designates 15 discrete deep sea coral zones and one broad deep sea coral zone, all of which were collaboratively defined by fishermen, scientists, and resource managers. The discrete zones are smaller areas of known coral presence or highly likely coral habitat, primarily offshore canyons or slope areas along the continental shelf edge. Restrictions applied to these areas would reduce or eliminate current fishing activities. The broad zone encompasses mostly unfished areas, and the management goal is to limit and prevent expansion of commercial gear use where little or no fishing has historically occurred. 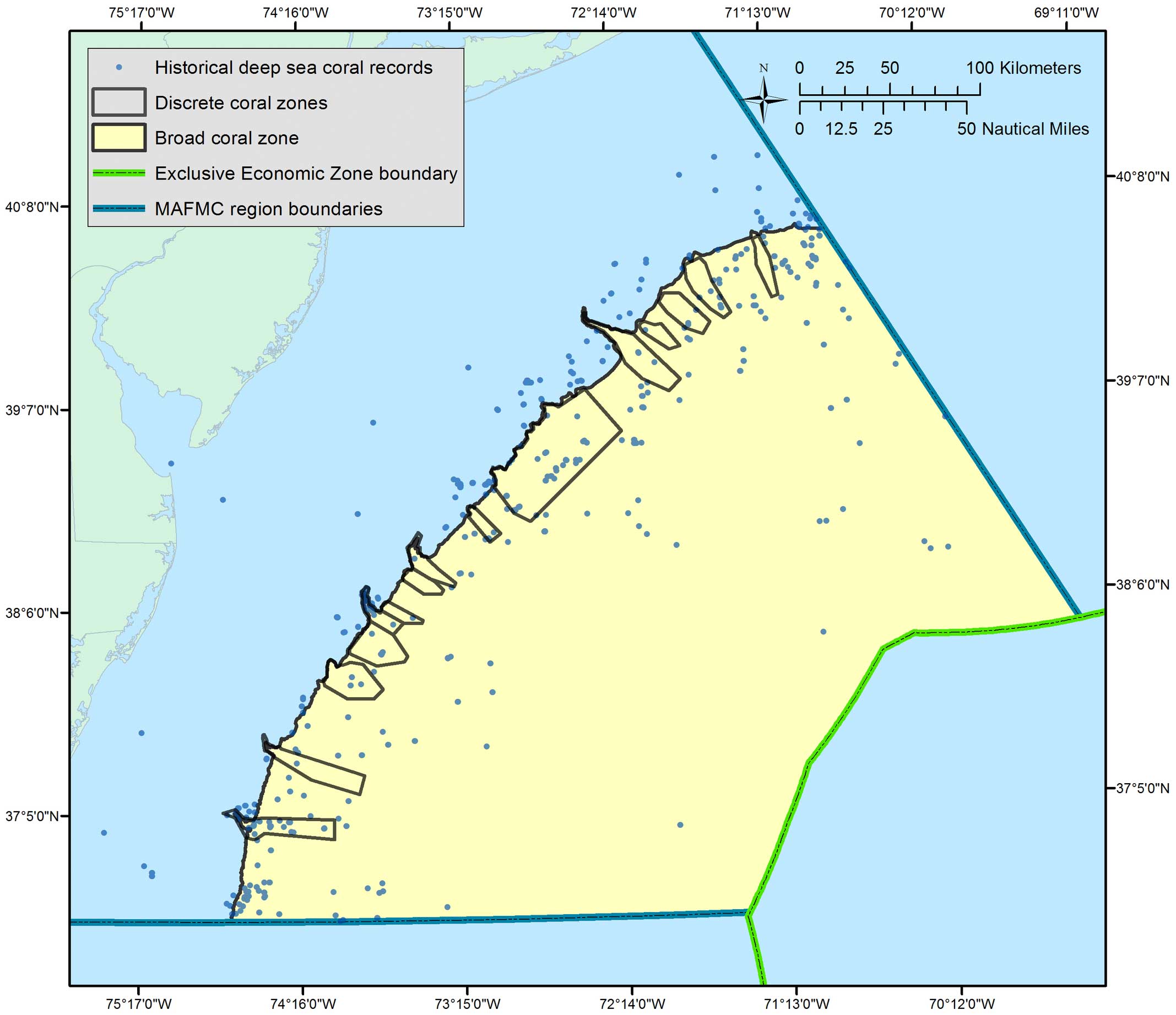 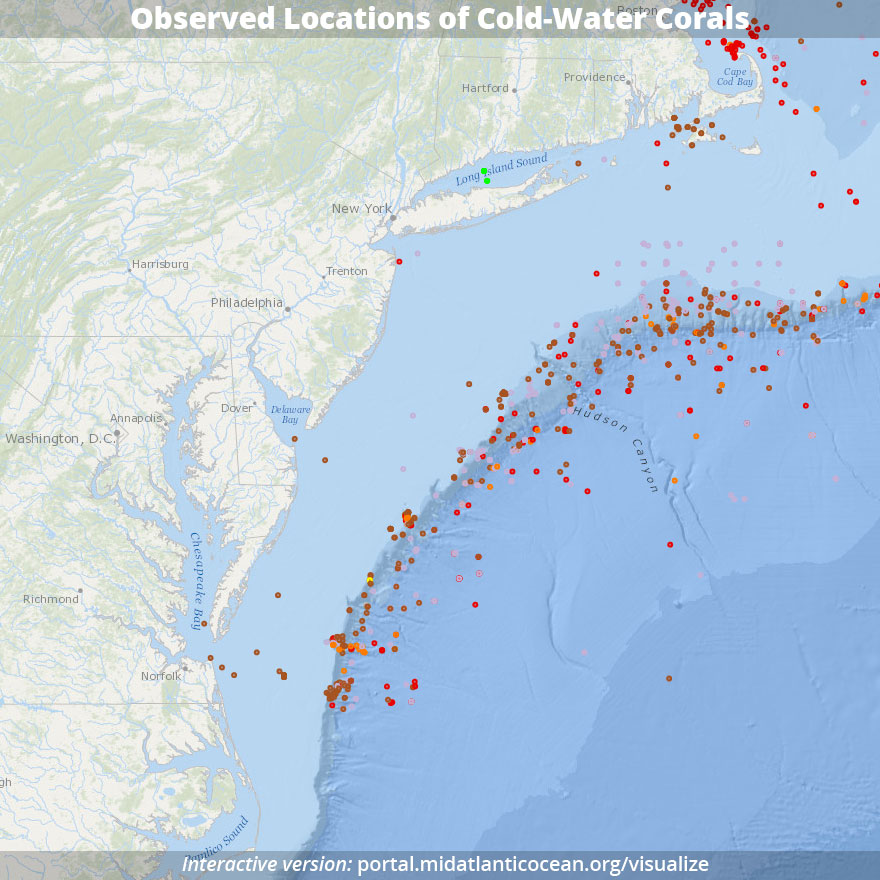 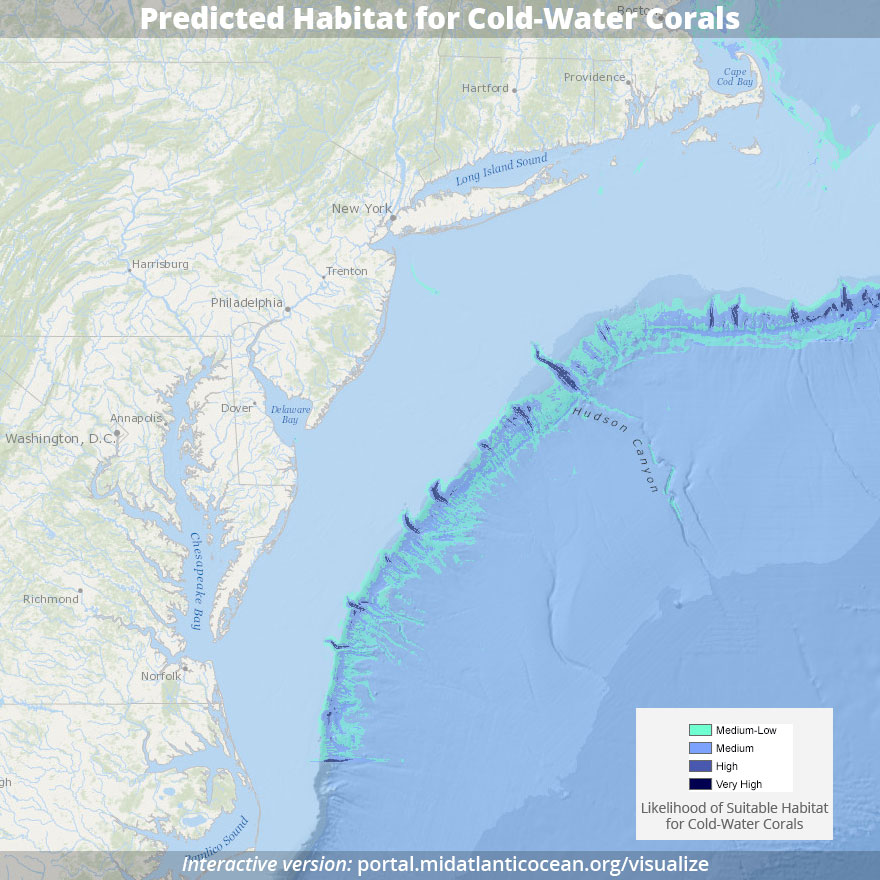 The following sections of the ROA are closely related to the Canyon Habitats and Cold-water Corals section: