Chemical and physical attributes of the Mid-Atlantic ocean and coast help to shape the biological patterns in the region. Their influences on ecology are reflected in the considerable variation in the types and abundances of species observed from place to place and from season to season in the region (Williams et al. 2015).

The underwater topography of the Mid-Atlantic ocean was shaped primarily by sea level fluctuations that occurred in pre-historic ice ages. Offshore sediments and the shape of the continental shelf resulted from the retreat of the last ice sheet and the 400-foot (120-meter) (Engelhart et al. 2011) rise in sea level that followed. Along the Mid-Atlantic coast, the width of the continental shelf narrows from about 120 miles in the north to only some 20 miles off Cape Hatteras (Stevenson et al. 2004). The continental shelf slopes gently from the coast out to between 60 and 120 miles offshore, where it transforms to the continental slope at depths of 320 to 650 feet at the shelf break. At the end of the last ice age, rivers of glacier outwash formed shelf valleys and slope canyons, and then deposited sediments on the outer shelf edge as they entered the ocean. Most valleys cut approximately 30 feet into the shelf, except Hudson Shelf Valley, which is over 100 feet deep. Past the shelf break, Hudson Shelf Valley becomes Hudson Canyon and is over 7,000 feet deep (Butman et al. 2006). 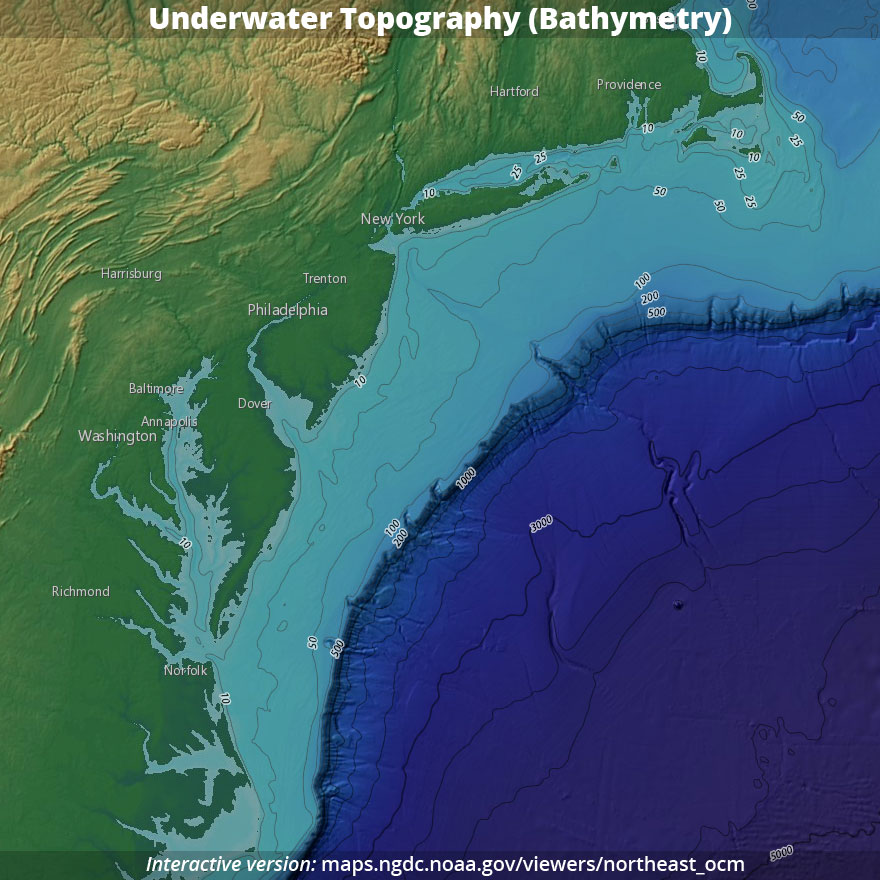 The shelf break and slope off the Mid-Atlantic U.S. shelf supports a diversity of habitats, including more than 70 submarine canyons ranging from depths of approximately 300 to 11,000 feet (NOAA Okeanos Explorer). Hudson Canyon, at over 7,000 feet deep and only 100 miles from New York City, is the largest known ocean canyon on the east coast of the United States and one of the largest submarine canyons in the world. It is one of several canyons along the edge of the continental shelf where assemblages of sensitive, long-lived corals provide feeding and stopover habitats for numerous commercially and recreationally important species.

Canyons are physically complex habitats with outcrops, steep slopes, and diverse sediments. The rocks and boulders exposed at the heads of the canyons and along their steep walls provide habitat for sponges, corals and anemones that require hard surfaces for attachment. They provide a high flux of fine-particle nutrients and often have areas of upwelling associated with high biological productivity that support a wide variety of species including unique deep-water corals and commercially important fish stocks. Although a limited number of these canyons have been studied, most are poorly known and are of significant interest to scientists, managers, and stakeholders. 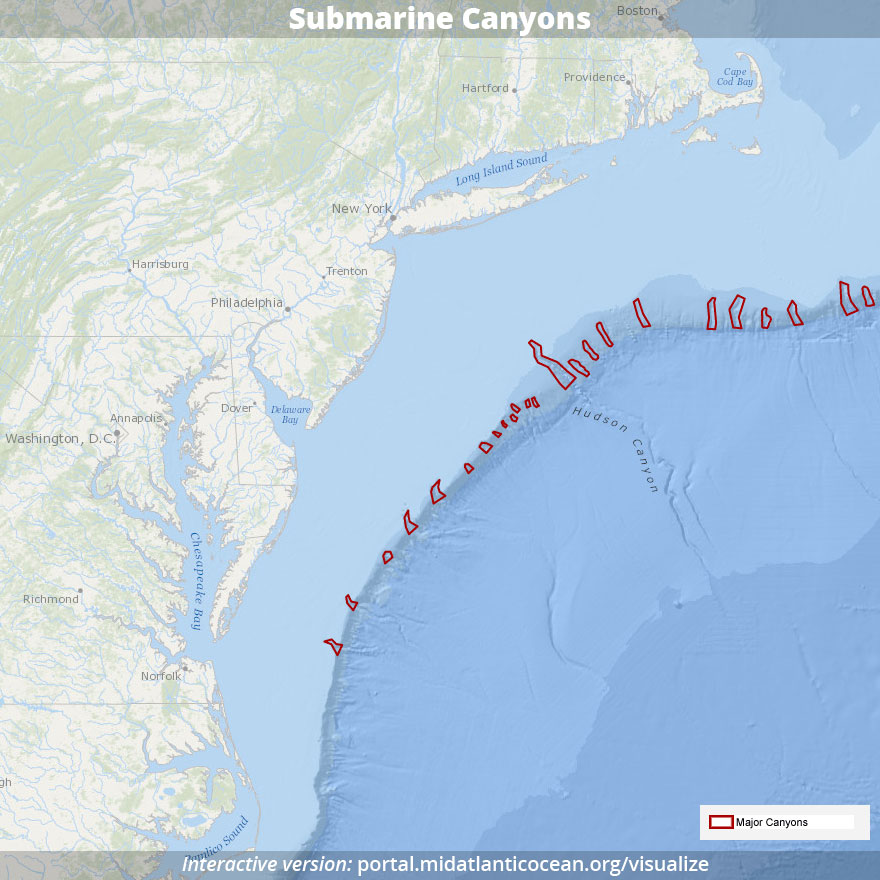 Habitats on the seabed can be characterized by the composition of the sediments there, usually by measuring sediment grain sizes. Smaller sediment grain sizes are associated with soft-bottom habitats (mud, sand), whereas larger grain sizes indicate areas of hard-bottom habitats (cobble, boulder). The Mid-Atlantic region includes large areas of soft-bottom habitats and some hard-bottom habitats. Extensive sand habitats of the continental shelf feature large ridge formations that are often covered in smaller sand waves, mega-ripples, and ripples (Stevenson et al. 2004). Between ridges are swales, where organic matter accumulates and serves as a food source that supports higher biomass and diversity of bottom-dwelling marine life (Stevenson et al. 2004). Most of the sediments on the continental shelf are sands, with some localized areas of hard-bottom habitats containing sand-gravel (NEFSC 2015). 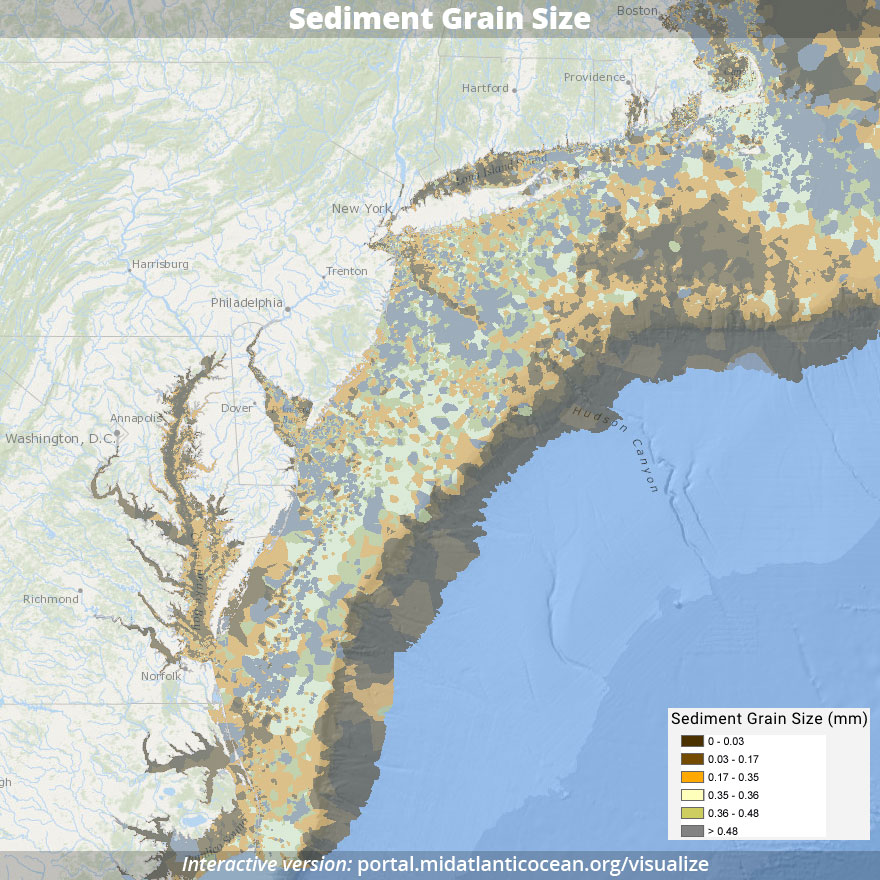 Artificial reefs are localized areas of hard structure have been formed by shipwrecks, lost cargoes, disposed solid materials, shoreline jetties and groins, submerged pipelines, cables, and other materials (Steimle and Zetlin 2000). In some cases, those materials were deposited on the seabed specifically for the purpose of creating fish habitat. Artificial reefs are important because they provide attachment sites, shelter, and food for many species. In turn, fish predators such as tuna may be attracted by prey aggregations. 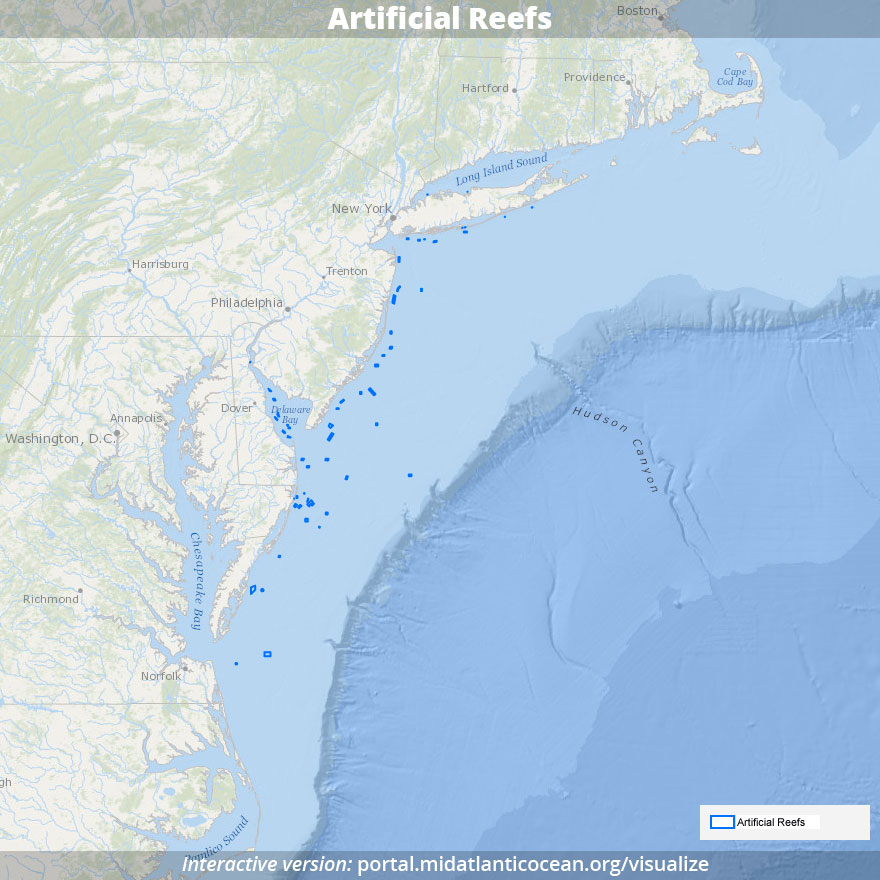 Although not explicitly included in the Mid-Atlantic regional ocean planning area, bays and estuaries are defining features of the Mid-Atlantic coast. Major estuaries include the Chesapeake Bay, Delaware Bay, and the Hudson Raritan estuary system of New York and New Jersey. Chesapeake Bay is the largest estuary in the U.S. at 4,500 square miles with a watershed that spans 6 states (New York, Pennsylvania, Maryland, Delaware, West Virginia, Virginia) plus the District of Columbia. Mid-Atlantic bays and estuaries contain extensive wetlands and salt marshes, and serve as important habitats for seagrasses, shellfish, and juvenile fish. Coastal areas and estuaries are important for nutrient recycling and primary production; they provide nursery and spawning habitat for many fish and invertebrates including economically important species. Tidal and subtidal mud and sand flats occur in salt marsh and other estuarine habitats. Salt marsh vegetation can also be a large source of organic material that is important to the biological and chemical processes of the estuarine and marine environment.