Purpose and Structure of the Regional Ocean Assessment 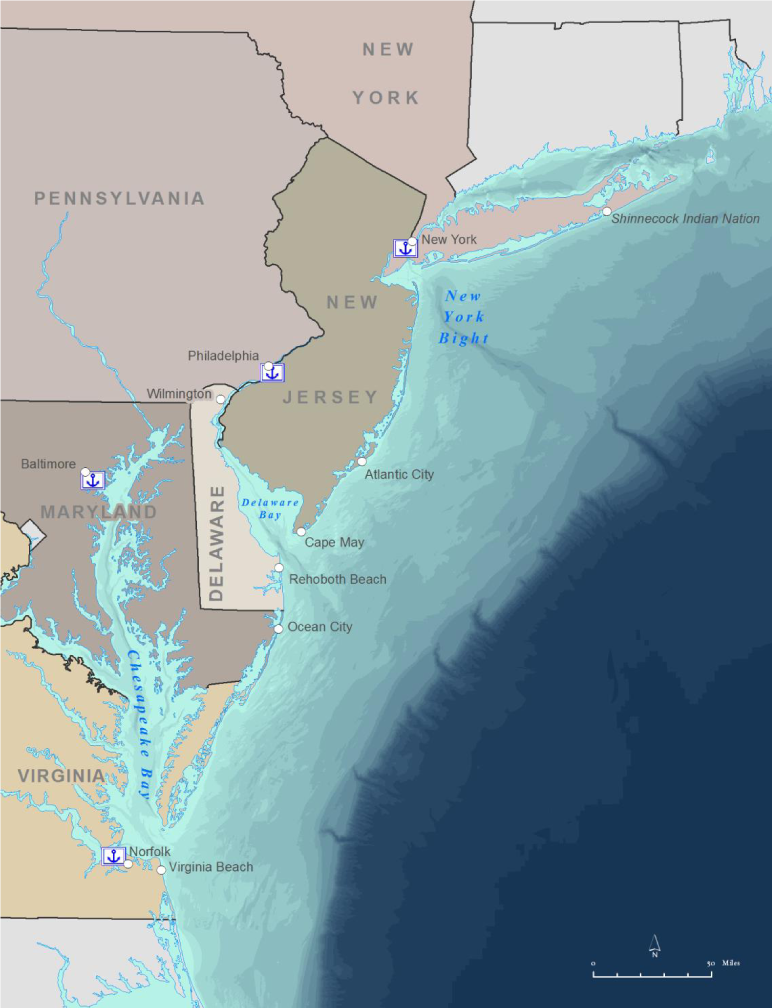 Overview of the Regional Ocean Assessment

Navigating the Regional Ocean Assessment: At the bottom of each page is a Table of Contents with links to all sections.

The Need for Ocean Planning

The ocean waters of the Mid-Atlantic, stretching from New York to Virginia, shape the environment, economy, and the culture of the region. For centuries, the ocean has provided food for the table, routes for transportation, places for recreation and relaxation—and much more. Ecologically, the Mid-Atlantic ocean contains diverse habitats that support numerous fish and seabird species, rare deep-sea corals, imperiled marine mammals, and many other types of marine life. Yet today the Mid-Atlantic ocean is changing dramatically, the human population is growing, and the ways in which people use the ocean are evolving and expanding quickly. Planning for those changes can help resource management and policy efforts to be effective, leading to improved ocean health and greater benefits for society.

What Lies Ahead for the Mid-Atlantic Ocean?

The following are examples of changes that are anticipated to occur in the next 20 years and that have implications for regional ocean planning.

Changes in the Ecosystem

Ocean Planning in the Mid-Atlantic Region

The National Ocean Policy establishes a framework for people of the United States to conduct ocean planning toward a healthy marine ecosystem and sustainable use of the ocean. Ocean planning is a science- and information-based process that can help advance local and regional interests. To develop regional ocean plans, representatives from multiple levels of government work together, publicly and transparently, as a regional planning body. Their work is informed by the expertise and perspectives of stakeholders whose participation ensures that the planning is based on a full understanding of the range of interests and interactions in each region. Under the National Ocean Plan, the scope, scale, and content of ocean plans are defined by the people in the regions themselves—to address shared regional priorities in ways that reflect their unique interests, capacity to participate, and ways of doing business.

Although now disbanded, the Mid-Atlantic Regional Planning Body (RPB) led a collaborative process to implement ocean planning. It was comprised of representatives from eight federal agencies with ocean interests1, six Mid-Atlantic states (New York, New Jersey, Pennsylvania, Delaware, Maryland, Virginia), three federally recognized tribes (Shinnecock Indian Nation, Oneida Indian Nation, Pamunkey Indian Tribe), and the Mid-Atlantic Fisheries Management Council. The Mid-Atlantic RPB received support from the Mid-Atlantic Regional Council on the Ocean (MARCO), a partnership formed in 2009 by the governors of New York, New Jersey, Delaware, Maryland, and Virginia. The RPB’s work and this Regional Ocean Assessment were also informed by the Mid-Atlantic Ocean Data Portal, an interactive mapping site that is updated regularly with data on the region’s marine ecology and the ways people use and interact with the ocean. 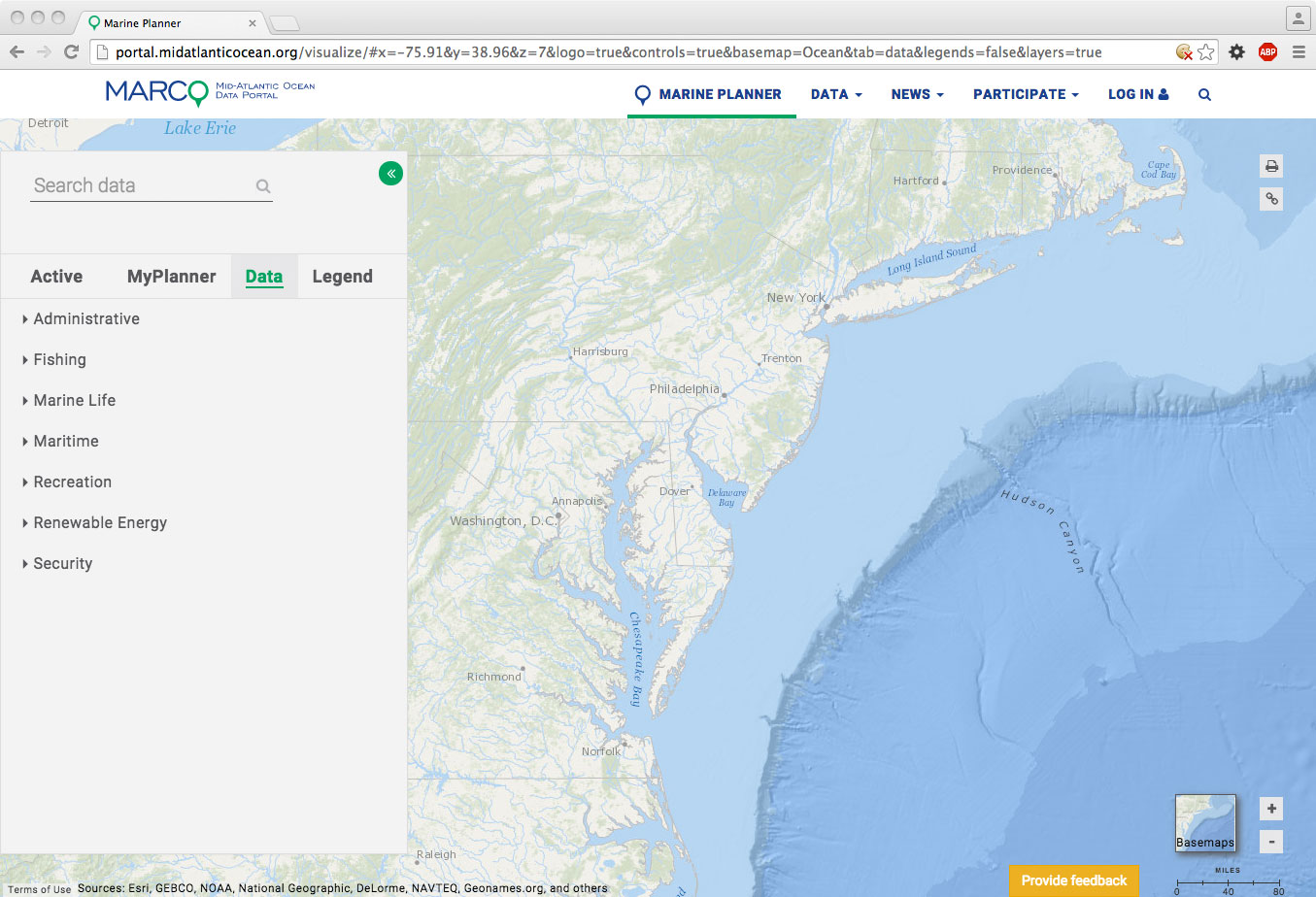 The Mid-Atlantic RPB initiated the regional ocean planning process in 2013 and released a draft Ocean Action Plan for public comment in mid-2016. The RPB submitted the final Mid-Atlantic Regional Ocean Action Plan to the National Ocean Council and released the plan in November 2016. Non-government organizations, educational institutions, fishermen, industry representatives, and the public are all important stakeholders and are integral to the planning effort. The Mid-Atlantic RPB sought to incorporate traditional knowledge and values from tribes, fishermen, and many others who can provide historical, ecological, cultural and economic context and contribute to a shared understanding of ocean and coastal sites.

After the RPB was disbanded, the Mid-Atlantic Committee on the Ocean (MACO) was established to continue collaboration between states, federal agencies, the Mid-Atlantic Fishery Management Council (MAFMC), and federally recognized tribes.

The Mid-Atlantic RPB envisions an ocean where safe and responsible use and stewardship support healthy, resilient, and sustainable natural and economic ocean resources that provide for the well-being and prosperity of present and future generations. In keeping with that vision, the Mid-Atlantic RPB defined two goals for the Ocean Action Plan:

The two sections of the Regional Ocean Assessment — Ocean Ecosystem and Resources and Ocean Uses — inform efforts to achieve those interrelated goals.